SAO PAULO (AFP) – When Monica’s landlord suddenly doubled the rent for the room she lived with her three daughters in Sao Paulo, she said they had no choice but to move to the street.

Like a growing number of poor people in Brazil’s economic capital, Monica has experienced bitter times during the Covid-19 pandemic, forcing her to choose between feeding or housing with her daughters, ages 12, nine and three. .

“If we spend everything on the rent, how are we going to fill our stomachs?” People need more than just a roof over their heads, right? Said Monica, 33, who set up a makeshift family camp a week ago on Republic Square, in the heart of this sprawling concrete jungle of 12 million people.

She spends her days collecting and selling recyclable materials, earning around BRL 20 to 30 a day, before picking up her daughters from school, she said.

Soaring unemployment and rising prices, especially of housing, during the pandemic have pushed many people like her onto the streets.

“There has been a huge increase in the number of people living on the streets for the first time,” said Kelseny Medeiros Pinho, of the Human Rights Clinic at the University of Sao Paulo.

“If you lose your job and have no alternative, the streets are your only answer. 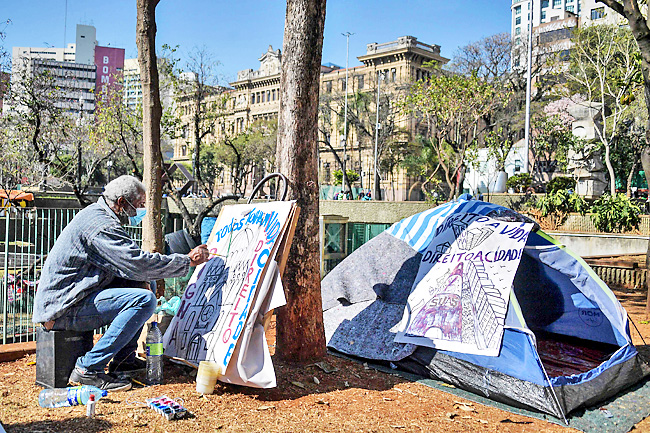 It didn’t help, she said, that President Jair Bolsonaro’s government reduced Covid-19 emergency aid to the poor from BRL 600 to BRL 150 this year.

The far-right president and the governor of Sao Paulo have both vetoed legislation that would have imposed a moratorium on evictions during the health crisis.

Across Brazil, at least 14,300 families were evicted from March 2020 to June 2021, and another 85,000 are threatened with eviction, according to the organization Zero Evictions (Despejo Zero).

In the state of Sao Paulo alone, nearly 4,000 have been deported, and 34,000 others threatened with deportation, he noted.

Anderson Lopes Miranda of the National Homeless Movement (MNPR) called the situation in Sao Paulo unprecedented in his 30 years of living and working with the homeless.

“Before, we mainly saw elderly people or workers who had lost their jobs find themselves on the streets. Now you see families, women with children, ”he said. The last official census put the homeless population of Sao Paulo at 24,344 in 2019, of which 85% are men. Organizations that work with the homeless said this was an underestimate.

Monica and her daughters share a mattress which they borrow from a “neighbor” in the square.

He watches over their few things while Monica works and the girls go to school.

“I try to live a normal life. Bathe, take the girls to school. But when you wake up you don’t look very good, you know? And everyone’s looking at you, she said.

“My biggest fear is getting sick and not being able to take care of my daughters,” she added.

“I dream of getting off the street. I do not give up. I’m just working and trying to get over it.

She said she didn’t want to go to a homeless shelter, because she was afraid of drugs and
violence there.

A few blocks away, Marcio Machado of the Power of God World Church, a Brazilian evangelical mega-church, is overseeing the distribution of 800 free breakfasts to the poor – double what the church distributed before the pandemic.

“It’s a terrible situation,” he said. “A shocking number every day. Men, women, children, entire families living on the streets.

The city opened 2,393 new accommodation beds to cope with the increase and increased the number of free meals distributed daily from 7,500 to 10,000.

Daniela Rosa Neves, 24, seven months pregnant with her second child, watched her almost two-year-old son play with a piece of banana in the street.

They have been homeless for three months. “I am worried about my children,” she said.